Over 15 years in 9 countries, Plan International has followed the lives of girls from birth to adolescence. In its latest report, the study finds that sex education for many teenagers is still more about ‘not getting pregnant’ than girls’ rights, health or education.

Sex education for teenage girls in many countries is still governed by rigid, conservative social norms – and too focused on the avoidance of pregnancy rather than girls’ rights, health, and education, according to a unique 15-year study by Plan International.

The development and humanitarian organisation, which focuses on girls’ rights, wants to see more open discussion and communication around sex and sexual health, ensuring girls safety is at the forefront of conversations.

“The study shows that as girls reach early adolescence, they are still considered too young to learn about sexual and reproductive matters,” explains Research Manager, Isobel Fergus.

“When they do have their first menstrual cycle, sexual and reproductive health education is approached solely a means to avoid negative consequences from sex. Even as the cohort girls enter later adolescence, it’s still deemed taboo to talk about sex.”

Study has followed girls since birth

The Real Choices Real Lives study has been following the lives of girls and their families in nine countries since the girls’ births in 2006.

Some 118 girls and their families, all from poor rural or semi-rural communities, took part in the study in 2021, and the research will run until the now-teenagers turn 18 in 2024, offering a unique insight into the lifecycle of girls and the choices, decisions and realities that shape their lives.

“A high value is placed on abstinence, which is generally spoken of in terms of being for girls’ protection, thus limiting their mobility – and placing the blame firmly on the girl in circumstances of rape or teenage pregnancy.

“The key advice from caregivers is for girls to avoid boys and not to allow anyone to ‘touch’ them,” adds Fergus. “This puts the onus on the girl to protect herself from unintended pregnancies, and even rape and other forms of sexual violence.”

Interviews with caregivers and girls themselves

The study is taking place in Brazil, El Salvador, Dominican Republic, Benin, Togo, Uganda, Philippines, Cambodia and Vietnam. Each round of research includes interviews with the girls’ caregivers, and after six years old, with the girls themselves.

The study finds that girls are treated differently by caregivers in the home, and there are different rules and expectations for girls both at home and in communities.

“Parents should also talk to their children, so they don’t learn false information from other people.”

Dolores, 12, from the Philippines, said society expects her to behave like a woman now she has her period: “If I have menstruation already, I should not play with boys more often because of that. We need to be more refined if we’re grown-ups already.”

Rosamie, 15, also from the Philippines, added: “It’s embarrassing when you’re told, ‘you’re already a young woman, yet you’re still playing outside.’ Then others hear it. It’s embarrassing.”

Stigma is carried down through generations

The study also found that beliefs and attitudes of caregivers around sexual and reproductive health are often echoed by the girls themselves.

Girls begin to monitor their own behaviour as well as that of their peers, repeating dialogues about how a girl should behave, thus ensuring that cycles of stigma and shame continue for girls who transgress societal expectations.

But Margaret, 15, in Benin told researchers teenagers would welcome conversations around sexual and reproductive health with their elders. “For me, my aunt whom I live with, should talk to me about these things. Parents should also talk to their children, so they don’t learn false information from other people.”

Folami, 15, a teenage mother in Togo, agreed that girls should be taught about sex and puberty “so that girls won’t make a mistake that ends in pregnancy which would stop them attending school, like me actually.”

“It is clear that girls want more information from their caregivers on sexual and reproductive health,” said Fergus, “and caregivers want more support to be able to communicate effectively on the subject with adolescent girls. 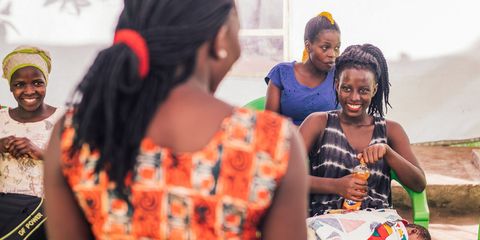