How is the food crisis in South Sudan affecting girls’ lives?

South Sudan is facing multiple humanitarian crises from conflict, to cyclical drought and floods, to severe food shortages. These issues affect girls’ lives in serious and far reaching ways – from halting their education to increasing their likelihood of child marriage.

What has caused the South Sudan food crisis?

South Sudan is facing multiple humanitarian crises, with many parts of the country affected by armed conflict and cyclical droughts and flooding.

The impact of COVID-19 restrictions on society and the economy have exacerbated these challenges. Around 7.2 million people – approximately 60% of the population – are predicted to face acute food shortages this year. This includes 1.4 million children under the age of five and almost 500,000 women who are pregnant or new mothers.

Families have told us this year is the most severe period of hunger in living memory, and the worst since South Sudan became an independent country in 2011.

We are already hearing reports of hunger-related deaths in parts of the country.

“Before the 2019 floods, I had cultivated and hoped to harvest enough grain. Unfortunately, when the floods came, most of my crop was washed away.

“The little I harvested was taken away when the attackers hit our village the first time. I ran to save my children and so could not save any grain.”

Food is scarce – mothers struggle to feed their children

Twenty-two-year-old Mary, a mother of 4, has had to move several times as attackers and flood water made displacement sites uninhabitable.

“The only food I have in the house is these three cups of sorghum. I plan to cook them a cup, a day.”

“If we must [ration] for the whole week then we shall divide the three cups into smaller quantities everyday or skip meals.”

At the height of the conflict, Mary joined members of her community to seek safety in Maruwo, a distant community which took them two days to arrive at.

“Due to the distances we had to cover, we could not carry any valuable items including food as this would weigh us down,” she says.

“When I returned to Gumuruk with my children, we have been surviving on handouts from neighbours and extended family members who have been enrolled in Plan International’s food program.”

Mary has just been enrolled in the programme and will receive her entitlement of 45kgs of sorghum soon.

Adolescent girls, along with under-fives are particularly vulnerable to malnutrition because of the increased rate at which they are growing, and their bodies changing.

Lack of access to nutritious food during adolescence has significant impacts on brain development, which undermines educational attainment, health, and ability to earn a living.

Malnutrition also poses particular threats to adolescent girls and women who are pregnant and breastfeeding. Almost 500,000 pregnant women and girls or new mothers are expected to be acutely malnourished in 2021.

These girls and women will be at increased risk of miscarriage and maternal mortality and face risks of stillbirth, new-born deaths, low birth weight and stunting for their children, leading to an intergenerational cycle of malnutrition.

“I miss my teachers and my friends.”

Schools have been generally closed in South Sudan since the outbreak of COVID-19 in March 2020. However, Joyce, 12, has had an especially long spell at home due to the additional responsibilities her mother has assigned to her.

“Since my mother would go early in the morning to look for food, I had to stay home to take care of my young siblings.

“I miss my teachers and my friends. I know of [one] who I may never see again because she was abducted in 2020 by armed people who came to attack our village.”

Joyce’s 10-year-old brother was sent to study in Pibor town but she won’t get the same opportunity as she is the eldest child in the family.

“My younger siblings cannot cook and since I am the only one able to cook and find firewood around the neighborhood, I have to stay home, as my mother goes to look for food,” she says.

An estimated 2.4 million children have been out of school in 2020 due to both the COVID-19 crisis and conflict. Girls face enormous barriers to accessing and remaining in education – in 2018, only 25% of girls in South Sudan were enrolled in primary school.

As families face mounting food insecurity, girls are increasingly called upon to care for younger siblings so parents can work or seek food, forcing them to miss or drop out of school. As a result, girls’ education is likely to be further deprioritised, worsening the education gender gap.

“At my age, I know I may be married if schools do not open.”

Martha, 13, has been unable to attend classes since March 2020, when the country’s first cases of COVID-19 were confirmed and schools closed by the government. A few months later, attackers descended on her town, pillaging homes and forcing the entire population to flee.

She explains how in her community, girls are at higher risk of being married at a young age if they are out of school, particularly when food is scarce.

“At my age, I know I may be married if schools do not open. In our community, I can be married to anyone my parents feel okay with.”

Adolescent girls in South Sudan overwhelmingly tell us that their risk of early marriage is closely linked to the economic situation of their families.

As already stretched assets and resources become ever more depleted, families are increasingly resorting to negative coping mechanisms to survive. For adolescent girls, this often means that the risk of sexual exploitation, child, early and forced marriage and with it their risk of early pregnancy and sexually transmitted infections increases.

Martha’s mother, Rebecca, explains how with food being so scarce, she fears that she may have no option but to offer Martha to a suitor. She may need the dowry money to help feed the remaining members of the family and send her siblings to school.

“With current peace efforts, I hope there will continue to be peace in our communities so that children are allowed to go to school as we parents struggle for their upkeep.

“We have no option than to marry her off if we can no longer pay her school. Things are hard. If I have nothing left, I will send her to marriage so that I can concentrate on raising her siblings.”

An estimated 50% of South Sudanese girls are married before the age of 18, and this situation rapidly worsens in times of crisis. Adolescent girls in South Sudan overwhelmingly tell us that their risk of early marriage is closely linked to the economic situation of their families. 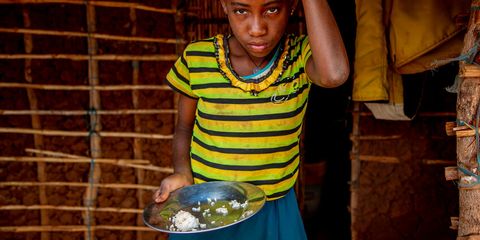 Adolescent girls in emergencies must have their specific needs addressed to reduce the impact of crisis and help them reach their potential.
Read more