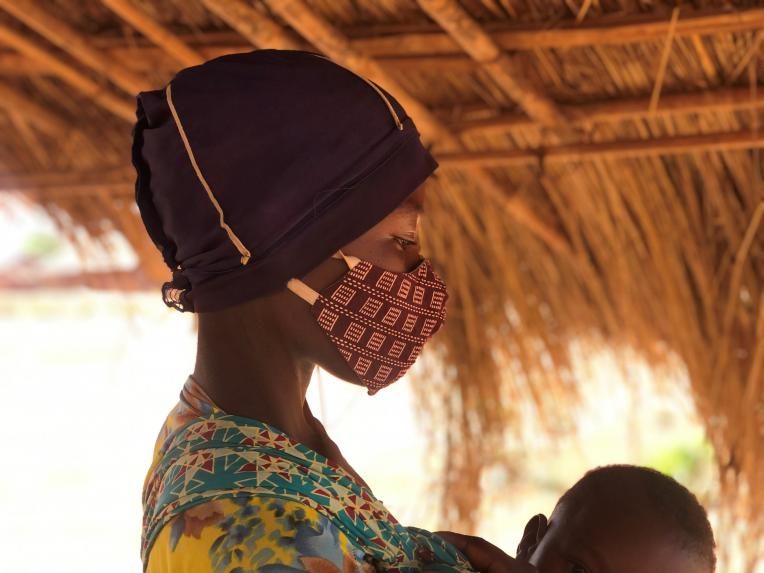 I recently returned from Mozambique where an ongoing conflict in the northernmost province of Cabo Delgado has displaced over 800,000 people. In Cabo Delgado I spoke to adolescents who have witnessed brutal violence and who endured days of trying to escape on foot.

One girl in particular stands out in my mind, she was the first of the group of adolescent girls to speak up, when I asked if they could share what they saw before fleeing their home districts. She demonstrated a sharp slicing motion across her neck with her hand, then in quick succession, each arm and then each leg. It was her uncle who she saw beheaded by insurgents. She said her brother had also been cut to pieces on the beach.

Girls are vulnerable to sexual violence

No displaced child should have to face an uncertain future in an inhospitable terrain so unlike their home, with fear of future attacks.

Sadly, stories as shocking as this are plentiful among the internally displaced civilians who have fled conflict in Cabo Delgado. They are not written to shock you, though they are shocking. We should be shocked and horrified. These stories need to get out. No child should see their family and friends massacred.

No community should have to live through such brutal violence and no displaced child should have to face an uncertain future in an inhospitable terrain so unlike their home, with fear of future attacks, vulnerable to protection risks and sexual violence, without enough food to eat, or without adequate psychosocial support, sexual and reproductive health services, or basic health care during a pandemic on top of it all.

It has taken the world too long to wake up and realise the severity of this conflict which began in October 2017. It has significantly worsened since then. The people I met with in the humanitarian, diplomatic, and civil society communities in Cabo Delgado and the national capital Maputo told me that the international community only started to pay attention to the situation in northern Mozambique in March 2021, when the town of Palma near the international gas industry hub was attacked.

The conflict continues and the current humanitarian situation is dire – people need food immediately, children and women especially are at great risk of exploitation and abuse, and there are many more needs. Additionally, Mozambican security forces and deployed Rwandan and Southern African Development Community (SADC) troops have had military successes in pushing the non-state armed group out of occupied terrain, but this alone will not resolve the conflict.

Human rights must be respected by all  actors and grave violations against children in this conflict must end.  A militarised and counter-terrorism approach alone is insufficient and dangerous because it fails to address the root causes of the conflict – including decades of underdevelopment, which thankfully is increasingly being acknowledged in the public sphere – an essential step in any path to peace and sustainable solutions.

Plan International has so far responded to the more immediate needs of displaced people in northern Mozambique through giving out essential aid such as hygiene kits, soap, reusable diapers, jerry cans, water purifiers, buckets, sleeping mats, blankets, and mosquito nets. We have also implemented education projects involving the construction of temporary learning spaces, teacher training, and providing education materials as well child protection projects, including child-friendly spaces. We along with NGO and UN colleagues are trying to meet the immense and complex needs but donor funding is still insufficient.

It is going to require a concerted effort from us all – NGOs, UN agencies, donor governments and diplomatic missions, the multinational companies so invested in the natural gas field discovered off the coast of Cabo Delgado, and the Mozambican government as well as local civil society to truly support the local population of northern Mozambique. Adolescents especially need access to quality education, economic opportunity, and hope. They must also benefit from the immense natural resources of Cabo Delgado province. This will not be easy but it cannot be ignored simply because it is complicated or seems unlikely.

Young people deserve a share in the future of Mozambique

The basic humanitarian needs of the population still need to be met, and peacebuilding efforts must involve both humanitarian support to address immediate, life-threatening needs, as well as to build more long-term, sustainable development. Addressing the root causes of the conflict has to start now and it has to be nuanced and comprehensive so that the people of northern Mozambique can live with dignity and in peace and access opportunities, quality education, livelihoods, and share in the future of the country.

This report presents new evidence on the gendered impacts of the current global hunger crisis from eight of the countries most affected.
Read more
See all publications

Millions of girls living through humanitarian crises are being deprived of their right to go to school. We must fund education for girls in crisis, blog Plan…
Read more
See all posts
Share