Plan International, a global organisation dedicated to advancing children’s rights and equality for girls, is excited to announce the launch of its first-ever animated Global Ambassador, Karma Grant, from the hit Netflix show, Karma’s World – produced by 9 Story Media Group and Karma’s World Entertainment, with animation from Brown Bag Films.

With a focus on diversity, leadership, creativity and the importance of community, Karma will inspire children to express themselves through music and become global changemakers.

“We couldn’t be more excited to welcome Karma as Plan International’s first-ever animated Global Ambassador. She’s such an inspiring character who uses her voice to help her community and brings her whole heart to everything she does,” says Georgina Spencer, Head of Partnerships.

“We know that children around the world will see themselves in her and that her passion to make the world a better place will be a message that everyone can get behind.”

Changing the world through the power of music

Karma’s World currently airs in 190 countries on Netflix and stars Karma Grant, a girl who has always dreamed of becoming a famous artist and helping change the world through the power of music. The concept for the show was created by Chris “Ludacris” Bridges and inspired by his real-life daughter Karma Bridges. The show aims to encourage children to express themselves through music while helping empower them to become global changemakers and create global impacts from local beginnings.

“I know first-hand that music can inspire, empower, and bring together people from the smallest towns to the biggest cities,” says Chris “Ludacris” Bridges. “Both the Karma’s World team and I are honoured to be a part of such a ground-breaking project, and for the chance to have our name behind an initiative that will touch the lives of so many children.”

Through her role as Plan International’s first-ever animated Global Ambassador, Karma will work to
highlight and share real life stories from children around the world, with the ultimate goal of
demonstrating how music can be used as a force for good, while advocating for girls’ rights and creating change for children across the globe. Each story that Karma takes on will champion youth voices and showcase how music is used as a tool for girls and children to express themselves, unite with other kids and make the world a better place.
These stories will be highlighted on Plan International and Karma’s World’s social media channels using the hashtag #MusicUnitesUs.

Both Plan International and 9 Story Media Group share the common goal of helping children around the world to unleash their full potential.

“We are honoured to be a part of this exceptional collaboration between 9 Story Media and Plan
International, and to help introduce Karma’s journey to children around the world,” says Natalie
Osborne, Chief Strategy Officer for 9 Story Media Group. “The Karma’s World mission to build
community and advocate for creative self-expression will surely resonate with audiences regardless of borders and geography.” 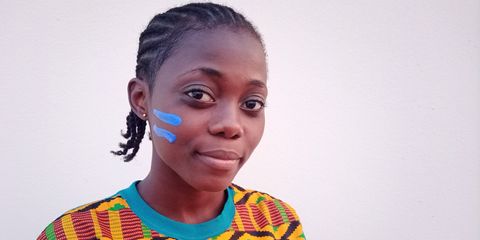 How to be a gender equality campaigner

Youth-led collective action could help the world achieve gender equality by 2030. This is where to start.
Read more
Share