The hunger crisis in South Sudan is deteriorating rapidly with many people struggling to find food and some surviving on just plant leaves and wild fruits. Without urgent action, the lives of children, especially girls, are at risk.

A recent assessment from the child rights organisation found that girls are at increasing risk of early and forced marriage as a result of food insecurity. Communities interviewed as part of the assessment also reported that children are being forced into work and finding food for their families instead of going to school. And this year, according to the UN led Humanitarian Response Plan, 4 million girls were affected by early or forced marriage, an increase from 2.7 million in 2021.

Currently about 7.74 million people are facing acute food insecurity. According to the UN 178,000 school children in South Sudan are affected by the hunger crisis.

The crisis is due to a combination of reasons including climatic shocks (floods, dry spells, and droughts), conflict, which is forcing families to flee their homes and the effects of COVID-19.

The situation is predicted to worsen as rising food prices, in part due to the conflict in Ukraine, have forced donors to cut funding into South Sudan resulting in cuts to food assistance for 1.7 million people this year. The assessment report revealed, a girl is at increased risk of being married off after any kind of food assistance has stopped.

To make matters worse, the fruits and plant leaves people are now dependent on are getting depleted due to the high demand within the communities.  Across the country a normal diet can consist of the root tubers of cassava and grains such as sorghum. But with those unavailable the other options do not offer as much nutrition.

In the community of Torit for example a discussion with youth indicated that the wild fruits were not adequate, very scarce and not good to eat. The fruits were eaten due to hunger and limited options. This has also resulted in students missing school because they are too hungry and tired to attend.

“The food was helping us a lot during school hours. Now children are not as many as usual. We are requesting our food come back to us,” says one 15-year girl from a school in Rumbek East.

The hunger crisis has also forced young girls into taking care of siblings while their mothers search for food. And boys are increasingly being drafted to work in the cattle camps.

In addition, a local NGO project reports states that 46% of children aged 10-14 are engaged in child labour in the country.

Increased violence towards children and women

Communities also reported high rates of school dropouts and physical violence towards children and women, for example physical attacks when there is no food on the table.

Young girls and women are also vulnerable to sexual exploitation as they have to travel further in their search to find food to feed their families. There has been a rise in reports of sexual gender-based violence in communities. A total of 7,550 cases were reported in 2021, and more than 2,000 cases in the first quarter alone in 2022 and the situation is expected to worsen with the food insecurity.

George Otim, Plan International Country Director for South Sudan says, “Children are the ones suffering the most in this crisis, especially girls. We need to act fast before it is too late. We estimate that 7.74 million people – more than half of the population – are facing high risk of acute food insecurity.  In the areas where Plan International operates, over 100,000 people who were depending on us for their immediate food needs in the lean season will have to be turned away if desperately needed funds do not come in.”

According to a recent United Nations report, the number of people affected by hunger globally rose to as many as 828 million in 2021. The report states that the world is likely to fall well short of targets to end hunger, food insecurity and malnutrition in all its forms by 2030. In response to the food crisis, Plan International is providing critical food assistance and child protection services in Pibor, Rumbek and Yei states. Plan International will also support internally displaced people and returnees in Yei, Torit and Magwi. 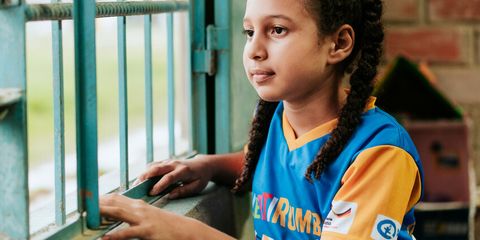 It’s our collective responsibility to ensure that children and their families are protected and can live up to their full potential.
Read more
See all posts

We're responding to needs of children affected by Java earthquake

The needs of children affected by the 5.6 magnitude earthquake that hit West Java, Indonesia, must be prioritised in response efforts.
Read more
See all news
Share