A new study by Plan International, in partnership with the Geena Davis Institute on Gender in Media, has found that a clear majority of girls and young women would like to become leaders but feel unable to due to worries that they will be discriminated against.

New research by Plan International and the Geena Davis Institute on Gender in Media has revealed that a clear majority of girls worldwide want to take on leadership roles in the workplace, politics and wider society. 9 out of 10 of those girls and young women believe that women leaders will suffer widespread discrimination and sexual harassment.

The study ‘Taking the Lead: Girls and Young Women on Changing the Face of Leadership’, was completed by close to 10,000 girls and young women between 15 and 24 years old, across 19 different countries. It was completed as part of research being done for the Women Deliver conference in Vancouver, the world’s largest conference on gender equality.

76% of girls and young women want to be leaders

Positively, the report found that 76% of the girls and young women surveyed said they aspired to be a leader. 60% said they felt confident in their ability to lead. Disappointingly, 94% thought that being a leader would result in being treated unfairly compared to their male counterparts. An additional 93% felt that female leaders experienced unwanted physical contact. Alarmingly these statistics come from a vast number of young women who have already taken up positions in leadership roles.

On the research findings, Anne-Brigitte Albrectsen, CEO of Plan International, said “The findings show that despite having the aspirations to lead, girls and young women have extremely negative perceptions of what being a female leader involves.”

The research was undertaken by Plan International as part of its Girls Get Equal campaign. The campaign supports girls and young women gaining equality, particularly when it comes to their power and freedom to challenge stereotypes. It is the first report to look specifically at girls and young women and their aspirations to take on leadership roles.

Girls and young women are underestimated

On reflection of Plan Internationals findings Ms Albrectsen said, “The findings show that if something isn’t done urgently, generations of girls will continue missing out on their ambition to become leaders.” 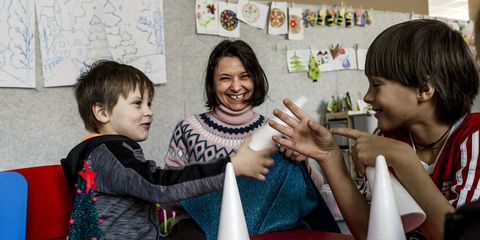 Millions of girls living through humanitarian crises are being deprived of their right to go to school. We must fund education for girls in crisis, blog Plan…
Read more
See all posts

As we look to the future, fuelled by our new global strategy, we aim to improve the lives of 200 million girls in the next 5 years.
Read more
See all posts
Share