Representations of women and girls in Nepal’s cinema

How girls and young women are portrayed through films has significant influence in determining how the world views girls and how they view themselves. With Girls Get Equal, we are calling for a radical change in the way the world engages girls and young women. Through the campaign, Plan International Nepal’s central aim is to create a world where girls are equally seen, heard and valued.

Representations of Women and Girls in Nepal’s Cinema finds films perpetuating harmful stereotypes that prevent girls and young women from fulfilling their potential. Women and girls are rarely presented as leaders, and even when they are in leadership positions, they are far more likely than men to be sexually objectified.

This research focuses on the specific role of media in shaping girls’ and young women’s ambitions and aspirations towards leadership. This is an attempt to document some of the challenges on representation of women and girls in Nepali films, establish ground for further study, and analyse the obstacles for diverse expression through cinema in Nepal.

Girls Get Equal, Youth in media 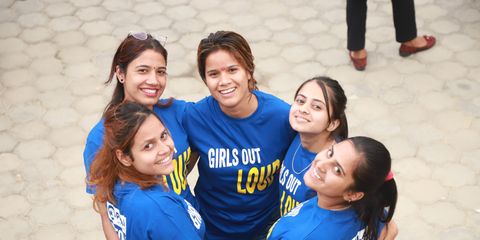