The below interview took place on 2 December 2022.

Young people, especially girls and young women, are powerful agents of change but face many obstacles when it comes to participating in political and civic life.

Despite that, young people all around the world are fighting for their rights.

On the occasion of Human Rights Day, we publish an interview on the country-wide demonstrations in Iran and the crackdown by authorities that continues to this day.

Plan International is not working in Iran. However, our mission and values make it imperative for us to shed light on the fight for equality and offer a platform to voices that can contribute to public awareness. In this context, we sat down for an interview with Inés Pousadela, Senior Research Specialist at CIVICUS.

Could you tell us a bit about CIVICUS and the work you do around the world?

CIVICUS is a global civil society alliance, with around 12,000 members from around the world. Our members are either civil society organisations or individual activists. In simple terms, our mission is to support civil society and strengthen citizen action globally and one of the main ways we do that is by focusing on civic space, which we conceptualise as both physical and virtual spaces structured by the freedoms of association, expression and peaceful assembly. In other words, a space where civil society can exist and develop.

We look at civic space as a context in which civil society works but also at civil society action itself. The difference is important as civil society is not just an object subjected to restrictions but an actor.

Girls and young women took to the streets and were then joined by young men, their school mates, their friends. There is something about this generational change.

News of brutal crackdowns against peaceful protesters in Iran keep emerging. We also heard a lot about how protests started by girls and young women, who were then joined by their fellow citizens in demanding a more free and just society. What can you tell us about the situation?

Iran has seen protests for decades but not of this size. This time, you see the role of the new generation. Girls and young women took to the streets and were then joined by young men, their school mates, their friends. There is something about this generational change. We see the most dynamic side of civil society protesting, you see young people who did not really mobilise before and who seem to not be afraid to do so. Many parents felt the need to support their children in the streets. Then, at what can be considered a turning point, labour unions joined them.

For many years, people have been controlled by fear. Now, the regime is forced to repress in a way they were not prepared for. I believe this caught even them by surprise. While they used force to effectively clamp down on protests in the past, they seem unable to do it now.

There is no sign this is going to be over any time soon. Despite the crackdown, people keep protesting.

Symbols are important. They are what remains in people’s minds.

During the World Cup, the Iranian team refused to sing their national anthem as a way of protesting this crackdown. What are your thoughts about these symbolic gestures from public figures?

Symbols are important. They are what remains in people’s minds. You may forget facts or details but our brains retain symbols. Look at the Black Lives Matter movement and how kneeling down became a recognisable symbol. This is powerful, how can it not be? It is a significant moment when Iranian players, who love their country, decide not to sing their national anthem to call attention to what is happening. They chose to navigate an extremely difficult situation.

We also need to know when symbols are not effective. It is the people that choose them, it is their issue, their country. When symbols are appropriated, their impact can be compromised. So, it is not only what a symbol is but, importantly, where it comes from and who is taking ownership.

CIVICUS argued in favour of the establishment of a UN fact-finding mission to ensure accountability. A few weeks ago, such a body was launched. What expectations should we have?

This is very positive. Civil society has been demanding this for years, not only because of the latest protests but because of systematic human rights violations and impunity. Keep in mind that there are some countries where it has been impossible to set this up. These missions are there to verify facts and may serve as a basis for accountability.

In Iran, the regime seems to do what they can to prevent any information from getting out of the country. People have found ways to share and access this information but it has been difficult.

Then, the question is what do we do with these facts. This is another problem.

It is important to mention here the crucial role of civil society. The UN relies heavily on them. Mechanisms reviewing human rights records would not be able to do so if civil society was not feeding into the system.

So, all in all, yes, the fact-finding mission is a promising start but we need to push for accountability based on the results.

Would you have any recommendations for the international community, including for the EU institutions?

There are two levels. It is about what states and intergovernmental bodies should do but also how international actors can support civil society. Civil society has many allies who sometimes do not know how to help. As CIVICUS, we recommend to our partners to look at two dimensions.

First, impact. Assess who drives change and support them. This requires flexibility, especially as we might be used to doing things a certain way and overlook changes in civil society itself. Informal groups, groups of young people, they are doing a lot with very little. Any support to them will be extremely valuable.

Second, helping civil society in restricted civic spaces. Even as CIVICUS, we have experiences where we wanted to support civil society movements but we had no idea how. Instead, we went to them with a question: what do you need? We then decided on the best way forward and the kind of interventions together.

Things can change and every positive change in the last decades is a result of civil society action.

I want to convey a message of optimism. We would not be doing this work if we were not optimistic. Things can change and every positive change in the last decades is a result of civil society action. Sometimes, we do not see progress but it is often because we look at the short term. Taking a step back, you can see everything that has been achieved. There is actually no reason to think that things are not going to keep improving.

As I recently heard an Iranian woman say: “We are a 4,000-year-old civilisation. Things have changed so much throughout the years. This is temporary. This is going to change.”

Biography of Inés M. Pousadela, Senior Research Specialist, CIVICUS: Originally from Argentina but now living in Montevideo, Uruguay, Inés designs, supervises and conducts CIVICUS research on civil society action around the world. Having started her career in academia, she also teaches university classes on Comparative Politics and Global Civil Society, connecting to her everyday work on social movements and human rights. She is passionate about women’s rights struggles both as a researcher and as a participant in what she views as the most successful revolution in modern history.

More information on CIVICUS can be found on their website. 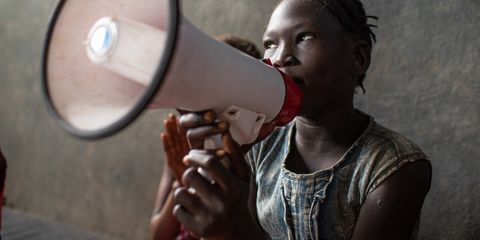