Activists and survivors from Sierra Leone speak out against female genital mutilation.

Why FGM should be abolished:

Despite her mother once being a practitioner of female genital mutilation (FGM), 17 year old Zainab refused to be cut and is now an outspoken advocate against the practice.

Zainab became an activist at the age of 13 when she joined an anti-FGM club in her school, a club she now runs.

FGM is prevalent in Sierra Leone due to Bondo society, an all-female secret society governing a girl’s rites of passage into womanhood, including this harmful ritual.

“For many of us, our parents did not attend school, so they did not know about the dangers of FGM.

“My mother, for example, became a Sowei (the decision-makers within Bondo society) when she was very young so she did not have the chance to get an education and she did not know that FGM was a bad thing to do.”

In the country’s northern province, where Zainab lives, 96.3% of girls are forced to undergo FGM.

“In the old days if you were not part of the Bondo society and had not undergone FGM, you would be discriminated against and they would stigmatise you badly. Parents still pass on that view to their children, so they often also try to force their children to join the society. That is what we are trying to put a stop to,” says Zainab.

“When a girl is forced to undergo FGM, she loses her future,” Zainab says.

“As well as the danger of death and bleeding, FGM also causes girls to drop out of school, which in turn leads to early marriage and to teenage pregnancy, because their parents will save up all their money to pay for their initiation.”

“They will use the money to buy food for the Soweis and for the crowd who come for the ceremony, so after they have done all that, when you come out from your initiation, your parents will not have any money to send you to school, so FGM extends poverty.”

Happily, her activism has had an impact on her mother who is no longer a Sowei thanks to Zainab’s influence. She is now also a proud advocate against the practice.

FGM can force girls out of school

Not all parents are as understanding as Zainab’s. Sixteen year old Isha* was forced to undergo FGM at the age of 12. Soon after, she was told that she had to get married, when she refused her parents threw her out of the family home.

“Almost as soon as I was cut they told me that I had to get married. As young as I was, I asked ‘Do I have to marry, or can I go to school?’ It was not easy for me, but that is the conversation that I had with my parents. It was a battle between us.”

“All they wanted was for me to get married. When I said that I didn’t want to do it they told me that they would disown me, that they would just cut me out of the family. It was really hard to go through something like that.”

Isha now lives at a school that supports young people who have experienced difficulties at home. She is part of Plan International’s Girl Power Group, where she mentors other young people, telling them about their bodies and their rights, how to protect themselves from FGM and child marriage. She dreams of one day becoming a nurse.

Fifteen year old Isatu* (pictured above) was cut at age 10 and married by age 13. Soon after she became a mother.

When her parents died in the Ebola outbreak of 2015, her aunt made her become a Sowei in order to make money. She was forced to carry out the procedure on other girls.

“I became a Sowei when I was 11, but I didn’t want to do it. My family forced me to. I knew that there were a lot of issues with cutting people. A lot of problems. And especially that death was a risk. So that’s why I never wanted to do it. But I was forced.”

However, she has not let these circumstances define her and is now an activist determined to stamp out the practice.

“Talking about FGM is not easy though. I’ve faced a lot of backlash from people who want FGM to continue. Some of them say very abusive things to me because they don’t want to stop the practice. But I don’t let it bother me because I know what I’m doing is right and I believe that all people should listen to what people my age are saying because we do know what is good for us.”

FGM can be traumatising

Twenty year old Sewanatu was forced to be cut when she was just 6.

“My grandma told me to follow her and when I asked where we were going she just said, ‘You need to become a full member of our family. After four days they came to check on me and my grandma said there had been a problem and they hadn’t removed it all. So they took me again and I went through the whole process a second time.”

“After I had been cut, I was terrified of my grandma. Any time I saw her, I wanted to run. Although my mum and dad knew that she was going to initiate me, it wasn’t really their decision. My grandma was the kind of person who would tell you that shame kills faster than disease. In Sierra Leone we have respect for our parents, so my dad was very nervous and he didn’t want to disobey his mum. So that’s why they allowed it to happen.”

“When I went back to school, I mobilised my friends and others within the school and we started talking about what should be done about FGM, child marriage, teenage pregnancy and all the things that affect us. And I have been campaigning ever since.” says Sewanatu.

Now she has finished school, she intends to become a doctor so that she can help to ensure that victims and survivors of sexual violence get justice. She is currently the Regional Coordinator for the Children and Youth Advisory Board of West and Central Africa, where she works with young people from across 14 countries to influence governments and the African Union on key issues that affect children.

FGM is a violation of girls’ and women’s rights

Because FGM is usually performed without permission and against will, it violates girls’ right to make important decisions about their sexual and reproductive health.

At least 200 million girls and women alive today in 30 countries worldwide have been subjected to FGM. It’s time to end the outdated attitudes that allow this harmful practice to continue. Thankfully, today’s young activists are determined to see this happen in their lifetimes.

Six years ago, the Ebola outbreak in West Africa killed more than 11,300 people.  Now, the world is grappling with COVID-19 pandemic, the biggest health cris…
Read more
See all posts 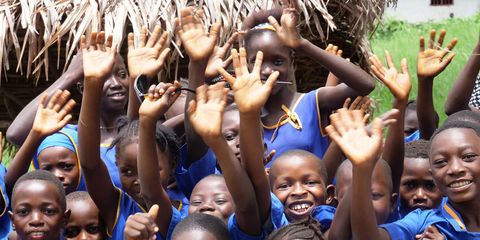 Plan International has been working in Sierra Leone for over 40 years to support children to go to school, stay safe and get good jobs.
Read more