Sarah, 23, is an online content creator from Kenya. She shares her experience of online violence and how she wants it to be tackled.

Plan International’s latest ground-breaking research, Free to be online, the largest ever survey on online violence – involving 14,000 girls in 22 countries – shows 1 in 5 (19%) have left or significantly reduced use of a social media platform after being harassed, while another 1 in 10 (12%) have changed the way they express themselves.

More than half (58%) of girls who took part in the study have been harassed or abused online. Attacks are most common on Facebook, where 39% say they have suffered harassment, but occur on every platform included in the global study including Instagram (23%), WhatsApp (14%), Snapchat (10%), Twitter (9%) and Tik Tok (6%).

The research was carried out as part of Girls Get Equal, Plan International’s global campaign for a world where girls and young women have the power to be leaders and shape the world around them. As part of the campaign, girls around the world have written an open letter to Facebook, Instagram, TikTok and Twitter calling on them to create stronger and more effective ways to report abuse and harassment.

Plan International spoke to girls around the world to find out how online harassment affects them, and the changes they’d like to see.  Sarah, 23, from Kenya, is an online content creator who has her own YouTube channel. Like many young women, she’s experienced online bullying and has been targeted on social media.

“When I finished high school, I put on some weight, which was primarily because there was no more school and life was good, but as soon as I shared my photos online on Facebook and Instagram, some people started saying mean things about my weight. It hurt so badly,” she explains. “I started working out but with time I learnt to accept myself and my body.”

Sarah, who is also a Youth Advocate with Plan International’s Safe and Inclusive Cities project, launched her YouTube channel as a way of talking about issues that affect young people.

“At the beginning, many people discouraged me and said I would not make it as other celebrities have. This really affected how often I would upload content because, every time I posted something, there would be people who would put me down,” she says. “With time I vowed that I would continue posting content because it is something I love and enjoy doing. I told myself that I would prove them wrong.” “When I started the YouTube channel, I had zero subscribers. Now, I am almost hitting 500 subscribers. It’s a shock to those that thought I could not do it.”

Sarah credits her parents and close friends for helping watch and share her videos and making her channel a success, as well as her own willpower.

“My journey as a content creator hasn’t been easy but it has been worth it. Sometimes people will tell you that your content is not interesting, but you have to stick to what made you start in the first place. It’s inevitable that not everyone will like everything you say.”

Sarah also notes the difference between harassment online and offline. “Online gender-based violence affects someone emotionally and mentally as opposed to street harassment which can sometimes be physical. But in both cases, the emotional torture that comes with both forms of harassment cannot be underestimated.”

And what about those in positions of power? She adds: “My message to social media companies would be to try and come up with advanced settings and more strict measures on how to handle harassment. Currently, the options that I use to avoid being harassed is to block anyone who speaks to me inappropriately online and I also try to ensure that I only accept friend requests from people with whom I have mutual friends.

“As a content creator, my hope for the future is that young women who are online content creators experience a world where they are free to express their thoughts online without being put down.” 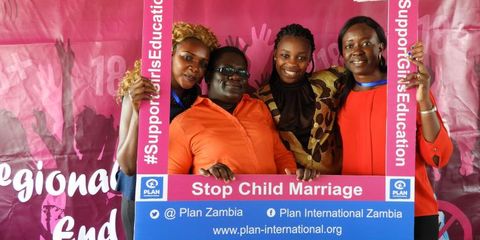 This issue of Mapya News highlights the global youth meet-up in the Netherlands, the rewrite her story campaign and various project updates.
Read more
See all publications