Guinea has officially declared an Ebola epidemic, after a number of deaths in the south of the country are linked to the virus.

The news that Guinea is facing the resurgence of the Ebola virus is hugely concerning.

Following the deaths of at least five people and in application of the International Health Regulations (IHR), the Guinean Government declared an epidemic of Ebola virus disease in the Nzérékoré prefecture, sub-prefecture of Gouecké.

The cases are linked to the burial of a nurse in Gouecké, near the Liberian border on 1st February.

Johnson Bien-Aimé, Plan International’s Country Director in Guinea, said “We are very concerned about the resurgence of Ebola hemorrhagic fever in Guinea, reporting five suspected deaths due to the epidemic in southern Guinea, one of our organisation’s intervention zones.”

“In 2014, when the first cases of Ebola were reported in the prefecture of Guéckédou, Plan International Guinea was at the forefront of the response. On this other unfortunate occasion, we want to reassure the Guinean Government that we stand by its side to help quickly contain the disease.’’

Plan International is ready to work closely with the government, in the management of the Ebola outbreak, following any directives issued through the National Health Security Agency (ANSS).

Currently, Plan International Guinea is asking its staff in the affected zone to respect the preventive measures which include limiting visits to offices, communities and families.

During the previous Ebola epidemic, girls and young women were particularly hard hit. Bearing the brunt of the loss of already precarious health services, community cohesion and basic needs such as food. Plan International is extremely concerned about the consequences of another epidemic.

“Financial and technical support from partners is urgent and necessary so that children, both girls and boys, are spared from this new wave and continue to go to school and benefit from an effective health system,” added Mr Bien-Aimé.

“Protection mechanisms at the community level should also be strengthened, livelihoods restored and support provided to ensure community resilience. We call for the mobilization of all technical and financial partners to work together to overcome this new epidemic of Ebola hemorrhagic fever.”

Six years ago, the Ebola outbreak in West Africa killed more than 11,300 people.  Now, the world is grappling with COVID-19 pandemic, the biggest health cris…
Read more
See all posts 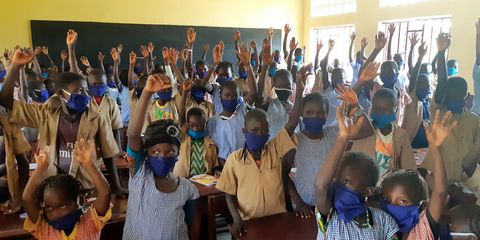 Plan International began operating in Guinea in 1989 to address the biggest inequalities and violations of children’s rights.
Read more