The radio show giving unmarried mothers a voice in Ghana

Nimaatu decided to drop out of junior high school when she fell behind with her schoolwork and could not keep up with her classmates, usually coming in last in class. Although none of her friends made fun of her or looked down on her, she lost confidence in herself and questioned her inclusion at school, so dropped out willingly.

After finding work as a farmhand in a neighboring village, Nimaatu met a boy and began a relationship with him. But when she fell pregnant, the man denied responsibility and moved out of the community leaving her to bring up the child alone. When her parents found out about the pregnancy, they threw her out of the family home for bringing disgrace to them.

“My parents were very disappointed that our family would be a reference point when talking about girls who had children out of wedlock. My father drove me out of the house when he learned of my pregnancy. Fortunately, there was a hut behind our house used to store yam harvested from my father’s farm which was empty, so I had to go and live there while my mother helped me to build another barn for next year’s harvest. It was in this hut that I delivered my son,” explains Nimaatu.

After giving birth, Nimaatu was still not allowed to return to the family home and was treated as a domestic servant by her family, forced to do all the household chores and farm work. One day, as Nimaatu was getting ready to go to work on the farm, she heard an announcement on the radio.

“It said they were looking for young women who were interested in skills training to join a new project. They were not looking for only school certificate holders, anyone could register to join,” says Nimaatu who made a note of the contact details before heading to the farm.

When she returned home in the afternoon, she heard the same announcement from an information center in the middle of her village. She called the number and formally registered her interest in the Pathways for Sustainable Employment for Women and Youth (PASEWAY) project which was being implemented by Plan International.

Funded by the German Federal Ministry for Economic Corporation and Development (BMZ), Plan International’s PASEWAY project is a blend of a technical and soft skills training package designed to equip young people with employable skills.

Nimaatu spent a year learning new skills and was able to take her son with her which made things a lot easier. The course helped her develop a new sense of confidence and she soon realized that she wanted to use her voice to advocate for the inclusion of young unmarried mothers in society.

“Because of the situation I went through with my family, I had lost confidence in myself. I was too shy to go out into public for fear of being victimised. I was scared of name calling so I kept to my hut with just my son. But after meeting other talented unmarried mothers, together with the things I have learned here, my confidence level has shot up and I feel challenged to advocate for other unmarried mothers to stand up for their rights.”

Passionate about her cause, she lobbied for a slot on the local state-owned radio station with a proposal she co-designed with the PASEWAY project team to reach out to young mothers to help them learn about and fight for their rights. Her proposal was accepted and she was allocated a 30-minute slot every week.

Her show now broadcasts every Tuesday afternoon on Savanna radio. “I am proud of how far I have come. From the onset, I doubted myself. My first day on the radio was so bad I didn’t want to go back, but the team from the PASEWAY project urged me on, they always listen to my shows and critiqued or praise me where necessary.”

Nimaatu broadcasts in her local dialect with the aim of reaching as many people as possible, promoting the better treatment of unmarried mothers, and ending the shame and stigma surrounding single parents. Thanks to her efforts, she is now seen differently by her family, friends, and neighbors.

“The people who looked down on me in my community now want to associate with me because they always hear my voice on the radio. Mothers now come to me to advise their daughters, I sometimes want to pinch myself to know if this is really happening. Plan International has really changed my situation and I am so happy,” says Nimaatu. Plan International Ghana distributed more than 4,000 sanitary pads to girls in schools in the Eastern Region as part of activities marking this year’s Menstr…
Read more
See all news 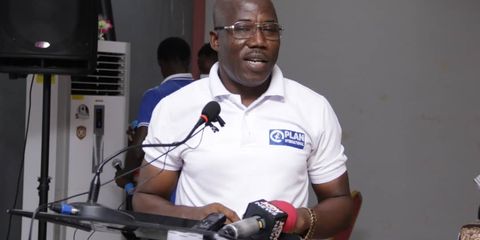 Steel bender boosts his skills and his business