Community volunteers like Ngachower, 56, are playing a key role in identifying and treating malnourished children in South Sudan where food shortages are affecting millions.

Whenever a child falls sick in her community, it is of great concern to Ngachower Etcho who is a community nutrition volunteer in Pibor, a county in South Sudan which has been heavily affected by conflict and floods. Hunger is particularly acute in the county and the area has the highest rate of child malnutrition in the country.

Having never been to school as a child, she did not think she had the knowledge or skills to be volunteer until she took part in a series of workshops held by the organisation. “The training taught me how important it is to look after children’s and women’s wellbeing; we learnt how to deal with families, talk to children, take arm measurements and refer cases to the nutrition centres,” she says.

Ngachower’s day starts by walking through the bush and along riverbanks to meet families and check if their children are suffering from malnutrition. She confirms if a child is malnourished by measuring their mid-upper arm circumference and checking for other potential symptoms. Every month she visits all the households in her community who have children below the age of 5, screening around 50 children in total.

She recalls recently meeting a young mother of 20 whose 2 year old daughter was severely malnourished. The following day, she took the mother and child to one of Plan International’s nutrition centres. It was not easy to convince the family to allow her to take them to the centre as many people don’t think malnutrition is dangerous and think that the child will overcome it as they get older.

Once malnutrition was confirmed, the nutrition centre started the girl on a supplementary feeding programme and provided her mother with training on good nutritional practices and how to feed her child a healthy diet. The family was also provided with some water purification tablets to clean their drinking water.

Support for children and families

A month later, Ngachower visited the family at home and was happy to see that the girl had made good progress. After measuring her arm, Ngachower was able to declare that the child was no longer malnourished. “We need to keep checking the child in the future to ensure she does not become malnourished again. Although this case had a happy ending, there are many children who need our help to protect them from becoming malnourished.”

As well as checking for malnutrition, Ngachower also teaches families how to prepare nutritious food and helps families learn the value of good hygiene practices; skills she learnt taking part in Plan International’s training sessions. “If I had not attended the training, it would not be possible to pass on this knowledge to mothers.”

“The community has nothing to eat except the food we get from Plan International, all our cattle were raided by armed groups and our belongings were swept away by the floods, so we have to rely on others,” Ngachower explains. “At least we have the nutrition centre which provides supplementary food to children and pregnant mothers, that is saving them.”

Plan International’s nutrition programme is being implemented with funding from the World Food Programme in 21 villages in Pibor in close coordination with the local government and community leaders. The nutrition centres provide services to the most vulnerable children, pregnant and breastfeeding women.

“There were no nutrition services in our village before, so children just had to suffer or travel far to get help. Once the nutrition centre was set up in our village, many mothers have gained hope. If these centres do not operate, children will starve and become malnourished and could even die.”

Ngachower says she is determined to continue her lifesaving work in the community. “At any cost, I will continue supporting children to prevent them from becoming malnourished.” 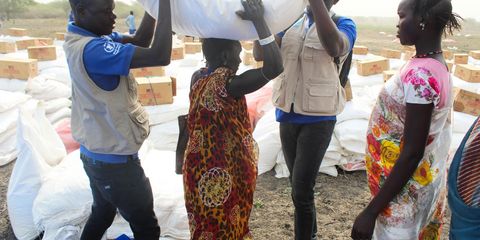 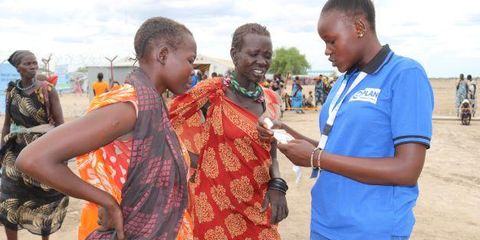 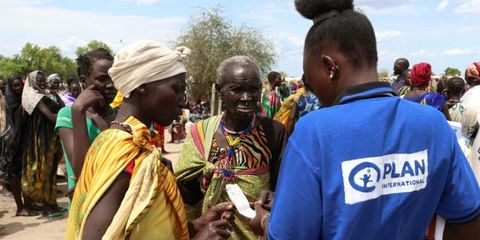