Following the devastation of Typhoon Haiyan, young women are getting jobs, setting up businesses and turning their lives around thanks to skills training.

“It’s a tiring job, but I like it. I especially love talking with the customers,” says Emily, 23, at the end of her shift working at a fast food chain in the Philippines.

She got the job after graduating from a Plan International skills training programme. “The skills I learned have opened up opportunities for me. I now have a job that feeds my family and sends my younger sister to school,” she says.

Communities and lives destroyed by Haiyan

Emily is from Tacloban City, an area decimated by Typhoon Haiyan which claimed over 6,300 lives in 2013.

After leaving school, she worked as a salesperson for 6 months. However, when Typhoon Haiyan struck and left the country’s infrastructure and economy in tatters, Emily became jobless.

Like many other young people, Emily’s lack of skills left her with few opportunities.

In response to the widespread youth unemployment post-Typhoon Haiyan, Plan International launched a programme alongside the Technical Skills and Development Authority and Accenture to help young people gain skills and get jobs.

As part of the project, young people are trained in skills that are in-demand and market-driven.

“I didn’t think twice about joining,” said Emily. “I’ve wanted to learn a skill, but the vocational courses are expensive.”

She enrolled in a housekeeping course that earned her an internationally recognised qualification. In addition, Emily also learned a number of key skills that have prepared her for life at work.

Preparing for life at work

“My training comes in handy when dealing with difficult customers. I make sure they are happy with the service I provide,” says Emily.

Her customer service skills and enthusiasm have not gone unnoticed by her manager Raymond. “If she keeps it up, she’ll have room to grow in the company,” he says.

Annalisa, 25, was able to set up her own business after completing the training programme. “I am now debt-free,” she says. “I thought the day would never come when I no longer have to borrow.”

Young people who want to start their own businesses are given specific training and provided with a small amount of money through the project to help them establish their enterprises.

Annalisa, a mother of 3, has set up coconut juice stalls in Tacloban thanks to the programme. The stalls, set up on modified bicycles, help her earn enough to care for her family.

Before Typhoon Haiyan she and her husband sold fish but they barely made enough money to survive. Every time they ran out of money they would borrow more.

“We spent everything we earned. It was easy enough to find someone willing to lend cash but the high interest rates made it almost impossible to get out of debt,” says Annalisa.

When Typhoon Haiyan struck and wiped out everything they owned, they were left without any way to make money.

However, since joining Plan International’s skills training programme, she has been able to establish her business and manage her money.

“I learned about saving and how important it is in running a business. So now, my husband and I are making sure that we put away some of our earnings,” she says.

With hard work and discipline, the couple were able to save enough money to buy a second stall within 2 months of starting their business and they hope to add a third soon.

To date, the skills training programme has helped nearly 4,000 young people gain vital and marketable skills that they have used to apply for jobs or set up businesses. Now they are turning their lives around and helping their country’s economy recover after the devastation of Typhoon Haiyan. 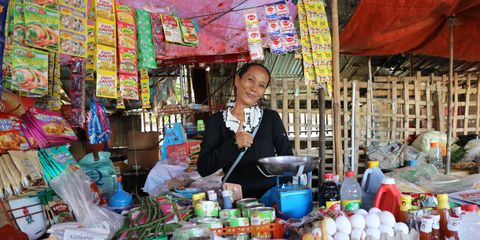