From sex for food to forced marriage, girls are caught between impossible choices for survival as severe food shortages sweep across Zimbabwe, Zambia, Malawi and Mozambique.

The Southern African food crisis is especially acute in Zimbabwe, Mozambique and Zambia, which account for 75% of the people needing food assistance.

The ongoing food crisis in the four countries is compounded by a number of factors including drought, the effects of cyclone Idai and its related flooding, conflict and economic downturn.

“Plan International is extremely concerned at the increasing number of adolescent girls caught up in food insecurity, especially where they are being traded off by family members in an effort to earn the next meal.” says Stuart Katwikirize, Plan International Regional Head of Disaster Risk Management.

The organisation is calling on the international community to make assistance available to millions in desperate need, particularly children and adolescent girls who are at highest risk.

How are people affected by the crisis in Mozambique?

Poor performance of the January-March 2019 rainy season in southern provinces (Maputo, Gaza and Inhambane caused substantial agricultural losses, with lingering effects expected to last until the next main harvest in February 2020.

“Drought affects men, women, girls and boys in different ways because their roles and responsibilities are different. Adolescent girls and women are typically more affected by drought because it is usually their job to find water and food for the family, therefore they are more likely to drop out of school to care for their younger siblings as their parents travel long distances looking for food.” Says Anne Hoff, Country Director, Plan International Mozambique.

How are people affected by the crisis in Zimbabwe?

Zimbabwe is facing a multi-layered crisis as a result of the El Nino induced poor seasonal rainfall, the devastating impact of Cyclone Idai and a challenging political and macroeconomic environment characterised by hyperinflation and very low incomes affecting 5.5 million people living in both rural and urban areas.

“Children are increasingly dropping out of school because of hunger issues which remains a serious concern,” said Angela Muriithi, Country Director, Plan International Zimbabwe. “An estimated 2.2 million people in urban areas are facing food and economic insecurity, with 53% of households in Harare reporting inability to pay school fees.”

How are people affected by the crisis in Zambia?

In Zambia, about 2.3 million people during the lean season, between October 2019 and March 2020, are estimated will suffer from severe food insecurity following the devastating effects of erratic rains, drought, water logging and the late start to the 2018/2019 rainy season which had affected agriculture production.

“Overall purchasing power is fast deteriorating for most vulnerable households exacerbating burdens for women and girls. If urgent humanitarian action is not taken to assist communities in desperate need, the situation will get much worse.” said Ramin Shahzamani, Country Director, Plan International Zambia.

How are people affected by the crisis in Malawi?

In Malawi, 1.06 million people (7% of population) are expected to be severely food insecure between October 2019 and March 2020. The affected population is in 27 out of 28 districts. The main drivers of food insecurity in Malawi this season include floods, drought, infestations of the fall armyworm and high prices for staple foods compared to last year and the 5 year average.

Plan International’s key priority is to support children, with a particular focus on vulnerable adolescent girls and young women who are now adopting negative and irreversible coping strategies in response to food insecurity, increasing their protection risks.

How are adolescent girls affected by the crisis in Southern Africa?

Limited access to basic sanitation services including menstrual and hygiene management as well as safe drinking water also remain a major obstacle to achieving improvements in the health and development of children and women in all four countries. It underpins a host of problems, contributing to childhood illness, malnutrition, and elevated school drop-out rates for adolescent girls, amongst other issues.

“Adolescent girls from highly food insecure areas in rural areas are considerably more likely to migrate from rural to urban locations than boys of the same age, because of weaker bargaining power and access to opportunities within the household. In doing so, many girls face heightened risks of coerced and transactional sex and exploitative labour, as well as social isolation.” said Phoebe Kasoga, Country Director, Plan International Malawi.

The risk of exposure to domestic violence and intimate partner violence is also expected to increase as a consequence of heightened family tensions. 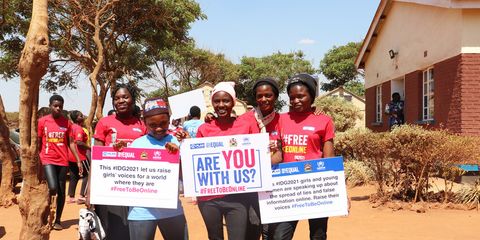 Plan International Malawi works alongside children, youth and their communities to address the structural and root causes of poverty.
Read more

The potential for malaria and waterborne diseases to spread among Cyclone Idai floods puts thousands of vulnerable children at risk.
Read more
See all case studies

Plan International has scaled up its response to Tropical Cyclone Idai across Mozambique, Zimbabwe and Malawi where hundreds of thousands are in desperate ne…
Read more
See all case studies