In Lai Chau, a province susceptible to devastating storms, Plan International Vietnam has been working to increase the resilience of vulnerable ethnic minority groups to the effects of climate change.

“Everything was swept away. This is where the kitchen used to be, and over there is where we placed our bed,” says Ha from Lai Chau province.

“I live in fear every day that there will be a sudden storm, so I rarely have a good sleep at night”, she says, unable to go to work because of heavy rain.

In 2015, Ha experienced the most severe flood of her life. Luckily, before it happened she took her son and daughter to their grandmother’s house so they were not hurt.

The next morning, most of the house had been washed away. Her 9 year-old daughter asked: “Mom, what if we didn’t run in time, where are we going to stay in the future?”

The house has now been reconstructed although it is smaller than before. Even though there are still a lot of hardships, their home is now in better condition and they have knowledge to protect themselves when a storm is on the way.

Ha remains worried for her children’s safety in the event of another strong storm. She constantly reminds them that they must run to their grandmother’s house if they are in danger.

According to projections based on Vietnam’s emission scenarios, by 2050, the average yearly temperature in Lai Chau will increase by 1 to 1.6 degrees Celsius. In addition, the average rainfall during rainy season will rise by 3.3% in 2050 and 6.3% in 2100. Therefore, the province is at risk of more extreme and unusual weather because of climate change.

As part of our work in Lai Chau province, we have increased the knowledge of over 5,000 community members in 4 communes on how to prepare for storms and other effects of climate change.

In addition, 540 poor households were provided with seeds and knowledge on cultivation and livestock production to increase their resilience to climate change. More than 20 initiatives on agriculture, energy and sustainable livelihoods have also been supported, benefiting nearly 4,000 people. 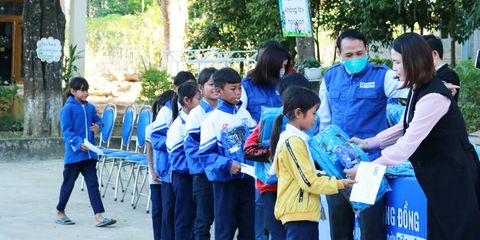 Ensuring children and their families live in resilient communities with the capacity to proactively prepare for and respond to disasters.
Read more