Although female genital mutilation has been banned in Kenya since 2002, the practice is still prevalent among Maasai communities. However, Kirisia, 42 is making a stand in his community and is calling for change.

Although most people in Kenya condemn female genital mutilation (FGM) and huge progress has been made over the last 3 decades to abandon the practice, including a ban by the government in 2002, the practice still continues in some communities, including among the Maasai people.

Kenyan Maasai are a proud people who have deeply rooted traditional values and customs. Maasai girls are cut between the ages of 12 and 14 to mark their change from girl to woman. It forms part of the traditional rites of passage for girls, necessary for them to be considered adults in their community. However, this tradition ignores the health risks it poses to the girls who are subject to it.

For Maasai men, a girl who has been cut is seen as virtuous and ready for marriage – a good source of income for parents who receive a bride price for allowing their daughters to be married off. An uncut girl on the other hand, is regarded as a ‘child’ in the eyes of the community, risks isolation and is unlikely to receive a proposal of marriage.

But not all men think this way. Kirisia, 42, is a Maasai elder who went against the grain and married an uncut woman. “I met her, and we fell in love. I did not see any problem with her being uncut. All that mattered is that we cared for each other,” he explains. However, this act was not regarded well within the community.

“I could sense people talking behind my back, although no one ever confronted us directly,” he says. “We faced trials from time to time but that did not stop us.” Kirisia attributes the ease at which the young married couple were able to live their lives to him being a man of the people, “I was born and raised here. I have helped a lot of people within my community and gained a lot of respect over time.”

Kirisia is now among a group of elders advocating for an end to FGM in his community. “Through Plan International, we have been taught about the harmful effects of FGM to girls and women. We are now passing on this knowledge to other men within the community.”

Calling for an end to FGM

He particularly focusses on young morans (warriors), encouraging them not to have any bias against women who are uncut and rather ensure that the practice is stopped. “I am glad to have seen that I made the right choice all along,” he says.

His wife, a cleaner at one of the local hospitals, has joined one of Plan International’s village savings and loans associations. Through her weekly contributions, they have been able to send their children to school. “She also condemns the practice and encourages other girls and women within the community not to be involved in it,” Kirisia says.

For their 3 daughters, Kirisia has high hopes: “I want to ensure they are all educated. I would like them to be able to sustain themselves and be able to help the community as well in the future.” 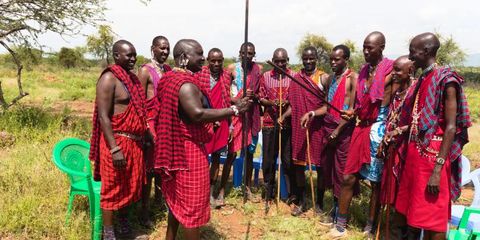 In Kenya, a new generation of Maasai warriors are speaking out against the harmful practice of female genital mutilation.
Read more
See all case studies

Sexual and reproductive health and rights for young people

This toolkit provides content and facilitation tips to effectively deliver training to young people on their sexual and reproductive health and rights.
Read more
See all publications